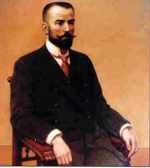 Krste Misirkov - Biography of the prominent publicist, philologist and linguist (1874-1926) and text of his 1903 paper "On the Macedonian Matters," which discussed the country's complex situation and proposed ways to resolve the Macedonian question and establish a Macedonian state.

There are also several others papers and news accounts here as well. Some of the content is in Macedonian but there is a lot in English as well.

These pages are made with the intention to gather as much as possible of the available information regarding Krste Petkov Misirkov, the prominent Macedonian publicist, philologist and linguist who set the principles of the Macedonian literary language at the beggining of the 20th century.

His oppinions on the political and national issues of the time carry the proof of the struggle of the Macedonian intellectuals and their contribution to the fight for the liberation of the Macedonians and the creation of an independent Macedonian state.

The documents presented here are given in their original form, without any comments or suggestions.
Posted by M at 5:55 AM

Krste Misirkov is a macedonian bulgarian and all attempt to make him a part of the new formed "macedonian" nation, is a pure serbo-communist falsification. He regreted many times the publication of "Za makedonckite raboti" and has died as a pure bulgarian patriot in Bulgaria!

Krste Misirkov is a great bulgarian. Please do not mock with his memory.