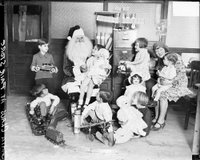 Evolution of Santa. The History Channel provides this history of Santa Claus. It begins, "The legend of Santa Claus can be traced back hundreds of years to a monk named St. Nicholas. It is believed that Nicholas was born sometime around 280 A.D. in Patara, near Myra in modern-day Turkey. Much admired for his piety and kindness, St. Nicholas became the subject of many legends. It is said that he gave away all of his inherited wealth and traveled the countryside helping the poor and sick."

Other good Santa history sites can be found at:

The Claus That Refreshes - Urban legends reference page addresses the influence of Coca-Cola on the modern image of Santa Claus.

Santa Claus - Some historical articles on Santa as well as information on the birth of Christ, plus links to some general Christmas sites.

I hope everyone has a Merry Christmas! I will be away for the holidays and it will be a few days before I post again.
Posted by M at 7:12 AM