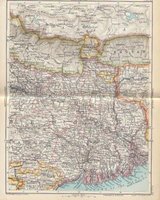 The Famine of 1770 in Bengal. This is a chapter from the book, The Unseen World, and Other Essays. It was written by John Fiske and published in 1869.

In this chapter, Fiske provides his explanations for the catastrophic famine resulting from British rule in the previous century. The Bengal famine of 1770 was a disaster that between 1769 and 1773 affected the lower Gangetic plain of India. The famine caused the deaths of an estimated 10 million people, approximately one-third of the population at the time.

Throughout the entire course of recorded European history, from the remote times of which the Homeric poems preserve the dim tradition down to the present moment, there has occurred no calamity at once so sudden and of such appalling magnitude as the famine which in the spring and summer of 1770 nearly exterminated the ancient civilization of Bengal. It presents that aspect of preternatural vastness which characterizes the continent of Asia and all that concerns it. The Black Death of the fourteenth century was, perhaps, the most fearful visitation which has ever afflicted the Western world. But in the concentrated misery which it occasioned the Bengal famine surpassed it, even as the Himalayas dwarf by comparison the highest peaks of Switzerland. It is, moreover, the key to the history of Bengal during the next forty years; and as such, merits, from an economical point of view, closer attention than it has hitherto received.
Posted by M at 4:38 PM

This is an amazing blog. I'm pretty glad to find this. I am a student of history (now doing my graduation). I live in India. I am writing a paper on 1770 Bengal Famine at present and suddenly came across this blog. Thank you sir for the information you have provided. I'll be a regular reader of your blog from now.

It sounds like this text is the latest attempt for Anglo or pro-Anglo scholars to mitigate what was nothing less than a massive fascist genocide. As recent as ten years ago, similar scholarship unequivocally blamed inept Indian administrators. The latest deception is to claim mismanagement though not malevolence by British officials. The reality is, and not particularly controversial, that this land had a more complex and productive economy than anything else previously witnessed by Europeans, and within ten years of British rule, was devastated into abject poverty, never to rise out of poverty again. To discuss this famine and not focus on the militarized and systematic extraction of taxes from a people rapidly descending into poverty and famine is disingenuous classic western self-deception. Even in ancient times, famine was a political economic event....not a matter as simple as weather, crop yields, Bligh, etc.

How does an entity - in this case a monopolistic band of merchants, the East India Company - extract taxes from starving people? If a man cant or wont pay his taxes, you take his virgin daughter and publicly gang rape her before cutting her breasts off. This was the true nature of the British presence in India. Is it rational to think the British were benevolent toward Indians while concurrently amongst the main players in the transatlantic slave trade and genocide of American Indians? India had a complex economy - the goal was to get rich from it, not to clear the land of people.

What needs to also be discussed is the impact this had on British society...the Bengal economy was more complex than the British economy and of 30 million rather than the British 5 million (perhaps 10 times the economic size). Bengal was rapidly taxed into a catastrophic famine in 10 years since the Battle of Plassey. The effect was transformational for England, and it is no coincidence that the early innovations of the industrial revolution occurred soon after Indias loot hit British shores.

Any critical reader of such literature should recognize that these topics are dynamic, dramatically so, and will read different in 10 years. One should ask themselves exactly where the truth lies, and what will be the mainstream scholarship in 100 years. I would argue that it will read that this is amongst the most heinous crimes in human history and that the loot sparked the industrial revolution.

Wow Anonymous spouts a political opinion rather than look at the facts. The proponents of the theory that this was a British Genocide have some grounds for complaint based on some truly stupid business decisions at the time but the picture is always bigger and more complex than a simple but politically attractive nationalist argument.

The nationalist political commentator never mentions comparable famines such as the Deccan famine of 1630-32 which killed 2 million because it does not fit their anti British tainted view. LIke most famines it was a result of consecutive crop failures and was one of the worst in Indian history.

The nationalist political commentator never mentions that British taxes during the overall period of British administation were lower than the Moghul predecessors. The hard facts are that Taxes in India decreased during the colonial period for most of India's population; with the land tax revenue claiming 15% of India's national income during Mogul times compared with 1% at the end of the colonial period. The percentage of national income for the village economy increased from 44% during Mogul times to 54% by the end of colonial period.

The famine of 1770 was a perfect storm of crop failure and management ineptitude by a new administation that had been in power for less 6 years and corrupt locals who chose theirown profitover the lives of their fellow man . The consequences were truly awful but cannot all be laid at the feet of the East India Company which was still facing financial difficulty despite profit improvement. It is ludicrous that anyone would suggest that the British Industrial Revolution was funded by Indian Rupees.