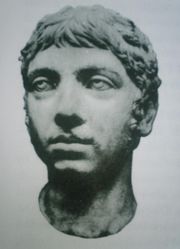 Elagabalus was a third century Roman Emperor of the Severan Dynasty. He ruled for four years after coming to the throne at the age of 14. He is poorly regarded by historians of the past and today. For example Wikipedia notes, "Elagabalus developed a reputation among his contemporaries for eccentricity, decadence, and zealotry which was likely exaggerated by his successors. This black propaganda was passed on and as such he was one of the most reviled Roman emperors to early Christian historians and later became a hero to the Decadent movement of the late 19th century."

The Roman people were never impressed with Elagabalus. Few mourned when he was murdered on March 11, 222. For a more positive and alternative view of Elagabalus, see The Amazing Emperor Heliogabalus by J. Stuart Hay from 1911.

The Syrian Elagabalus (204-222) was one of the most bizarre Emperors of Rome. He was a nephew of the mentally unstable Emperor Caracalla (188-217). When Elagabalus was 14 years old, his grandmother, Julia Maesa, his mother, Julia Soaemias, and her lover succeeded by bribing and plotting in gaining the throne of the Roman Empire for him. After the execution of his mother's lover, Elagabalus left the Imperial government in the hands of his grandmother.

Originally Elagabalus was called Varius Avitus Bassianus. He became known as Elagabalus, because he was the high priest of the deity El-Gabal, possibly the Syrian sun god Baal. It was a phallic-oriented cult; the sun god was worshipped in the form of a great, black meteorite and two colossal phalli flanked the entrance of the temple in Emesa. When Elagabalus became Emperor, he made the crazy attempt to introduce this Syrian cult to Rome. He had a new temple built on Rome's Palatine Hill and had El-Gabal's black relic transported to the new temple in a chariot decorated with gold and precious stones. In addition, Elagabalus conceived the idea of marrying his god to a goddess, either the Semitic goddess Astarte or the Sabine goddess Minerva. In 220 he broke into the secret sanctuary of Vesta and raped Aquilia Severa, a chaste Vestal Virgin. Although Roman law held that any Vestal who had had sexual intercourse should be buried alive, Elagabalus married her, expressing a hope for 'god-like children'. He divorced her soon afterwards, but took her back in 222.
Posted by M at 1:05 PM