Declassified Documents Relating to the Military Coup in Chile 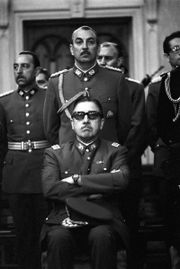 Declassified Documents Relating to the Military Coup in Chile. This site includes CIA memoranda and reports on "Project FUBELT" which was a codename for operations to promote a coup and destroy Allende's government. The declassified files are from the National Security Archives.

The Encyclopedia of World History wrote of the event, "PRES. ALLENDE OVERTHROWN in U.S.-backed military coup. Anti-Allende forces claimed he had committed suicide during the siege of the presidential palace. GEN. AUGUSTO PINOCHET (b. 1915) emerged as head of a four-man junta. In the next month perhaps as many as 30,000 dissidents were rounded up and tortured, and approximately 2,000 were murdered. Political parties and labor unions were banned, and Pinochet moved quickly to adopt a free market strategy to 'regenerate' the Chilean economy and society."

September 11, 1998 marks the twenty-fifth anniversary of the military coup led by General Augusto Pinochet. The violent overthrow of the democratically-elected Popular Unity government of Salvador Allende changed the course of the country that Chilean poet Pablo Neruda described as "a long petal of sea, wine and snow"; because of CIA covert intervention in Chile, and the repressive character of General Pinochet's rule, the coup became the most notorious military takeover in the annals of Latin American history.

Revelations that President Richard Nixon had ordered the CIA to "make the economy scream" in Chile to "prevent Allende from coming to power or to unseat him," prompted a major scandal in the mid-1970s, and a major investigation by the U.S. Senate. Since the coup, however, few U.S. documents relating to Chile have been actually declassified- -until recently. Through Freedom of Information Act requests, and other avenues of declassification, the National Security Archive has been able to compile a collection of declassified records that shed light on events in Chile between 1970 and 1976.
Posted by M at 6:36 AM