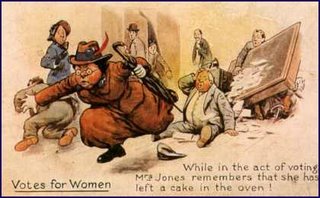 The Emancipation of Women: 1750-1920. This site has a great deal of information on British suffragists and their organizations, including biographies with portraits, databases of primary sources, and bibliography.

The bulk of the site deals with biography. However, the content is also organized by issues impacting women in the 19th century, pressure groups (including the Anti-Suffrage Society), strategy and tactics, and parliamentary reform acts.

The cartoon above is an example of the anti-suffrage movement in the UK. The caption reads, "While in the act of voting, Mrs. Jones remembers that she has left a cake in the oven!" It is from 1908. It most not have been very effective as suffrage for women would soon be approved.
Posted by M at 1:13 PM