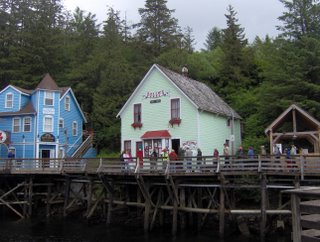 The ms Zaandam was in Ketchikan today. This city has history of course but it pales a bit in comparison to Sitka. The ship was only here in the morning as well so I did not have a lot of time to explore.

I did learn that the "bridge to nowhere" is proposed to be built here. There is legislation in Congress to build a 400 hundred million dollar bridge to connect a few islands to Ketchikan. Very few people would benefit. As nice as the people are here, I have to think there would be a better use for this money...

As with all parts of Alaska, the local native tribes claim they have been here forever. Evidence shows that the area was used as a Tlingit fish camp in pre-European/American settlement days. Americans (and others) came to the area in 1885 when miners and fishermen moved in. A gold strike in the late nineteenth century brought in more immigrants.

Timber and fishing helped Ketichikan to grow. By the 1930s, the town claimed it was the "salmon capitol of the world." I saw several signs which still make this claim. There are over 9000 people in the city today. (A lot more on cruise ship days of course...)

As I mentioned earlier, the ms Zaandam was only in dock briefly. My wife and I only had time for one shore excursion. We selected the "duck tour." This consisted of a bus that also is a boat. We drove around town and then went right into the water with the same vehicle.

I learned a lot about the town lore in this tour. In addition to what I wrote above, the history of Ketchikan features a prominent red light district from the late 19th and early 20th centuries. At one point, over 120 women were known to ply the prostitute trade in town. The Dolly House Museum shares this history and features the life story of the most famous prostitute in Ketchikan history. The museum stills sells gift certificates even though the hooking trade is now dead or underground...

This was a charming little city (town). Outside of the salmon and the seasonal tourist trade, I do not see much to suggest it though. I can imagine living in Sitka or Juneau but not here.

These posts from your cruist ship have been great. I've enjoyed reading them and told Hubby Dear that I have to go next year!

Glad you are enjoying this. I certainly have had fun on this trip.

I'd be interested to know what sorts of things contributed to your feeling that you could live in Sitka or Juneau, but not Ketchikan. Having grown up in Ketchikan, I am of course extremely biased, but I'm just wondering what the differences were between your impressions of each town.