Alaskan History Cruise, Part One - (At Sea) A History of Holland America and the ms Zaandam 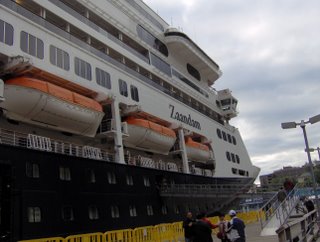 Seattle and the state of Washington are far behind us now. There are no scheduled ports of call today. I have been exploring the ship and have been having a good time walking around the deck and over eating.

The coast of British Columbia is beautiful. We are cruising along the coast of Vancouver Island and I am happy I remembered to pack my binoculars. It is hard to describe the wonderful nature scenery.

I was hoping to sit down to watch the USA vs. Italy World Cup game and hope for an improbable American win. I have never watched a World Cup game on a cruise ship, this should be memorable. However, the ship does not seem to have ABC available. I will look around and hope a lounge bar is showing the game. In the meantime, the history focus of this post will be on the Holland America Line and the ms Zaandam.

The line was established on April 18, 1873 as the Nederlandsch-Amerikaansche Stoomvaart Maatschappij (Netherlands-America Steamship Company). For the first few decades, the company was into cargo runs and ferrying passengers. The official history of the company notes, "The line was a principal carrier of immigrants from Europe to the United States until well after the turn of the century, carrying 850,000 to new lives in the New World."

The company began offering cruises in 1895. Eventually, it dropped both the passenger ferrying and cargo aspects of the business in the 1970s. In 1883, Holland America adopts the "dam" suffix for the names of its passenger liners. This tradition is still being followed today.

During World War I, six Holland America ships were lost. Thirteen employees also died. The Statendam II was taken over by the British for use as the troopship Justicia, which was torpedoed and sunk in 1918.

The Great Depression put a financial hit on Holland America. Twelve ships were sold for scrap. A lot of employees were laid off while others had to accept large pay cuts.

Business began to increase as the 30s went on but then World War II came into the picture. Holland America started the war with 25 ships. Only nine remained in 1945. 264 Holland America employees died during the fighting. The Westernland, docked in England, became the seat of the Netherlands government-in-exile.

Air travel in the 50s is the main reason that Holland America dropped the trans-Atlantic traffic aspect of operations. By 1965, 95% of travelers were flying.

In 1971, Holland America Line bought one million shares of the Alaska tour company Westours and controlling interest. The current cruise I am on I guess is a dirct result of that business transaction in the 70s. The Prinsendam conducted Holland America Line' s first Alaska cruise on the Inside Passage itinerary in 1975. In 1980, a fire broke out in the Prinsendam's engine room. All aboard are evacuated safely but the the ship sunk west of Sitka.

History of the ms Zaandam

The ms Zaandam does not have a long history. It is named for the Zaanstad district of Amsterdam. It is the sister ship to the Volendam. The ship was christened by the Olsen twins. It entered service on May 6, 2000 in the Caribbean.

This is a nice ship and I hope it does not make any history on this trip!