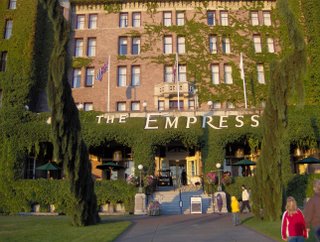 (The Empress Hotel in Victoria)

Yes, I know that Victoria is not in Alaska. It is in British Columbia. However, it is the last stop on this Holland America Alaskan Cruise. As this is on the cruise, I will include it on my history series based on the tour. Please, no nasty comments on the location of Victoria! I know...

The ms Zaandam will only be in Victoria for four hours late tonight. I plan on visiting the downtown and looking around and maybe drinking some beer. However, I am not going to have the opportunity to explore much history. As such, there will be no "Miland in Victoria" section to this post.

The local natives have been in the Victoria area for over 7000 years. They had a complex society which placed a heavy emphasis on wealth and included slavery. In 1778, Captain Cook located Nootka Sound. With him was William Bligh of the Bounty mutiny fame. Cook traded with the natives and departed.

The Harmon, captained by James Hanna, visited in August 1785. His crew had bad manners and exploded gunpowder under the chair of a local chief. The natives got angry and started fighting. Twenty of them died in the ensuing fight.

Captain Vancouver surveyed the area in 1792. He created a good map of the area. Alexander Mackenzie reached the area via land and canoe in 1793. He was the first recorded person to cross North America primarily via land.

Fort Victoria was built by the Hudson Bay Company in 1843. Obviously, it was named for Queen Victoria. It grew quickly and had 25,000 miners present by 1858 participating in the Cariboo Gold Rush.

Law and order was an early priority for the community. Victoria passed the first gun control law in North America. Judge Matthew Begbie was on the bench from 1858 to 1894. He is noted for sending 28 men to the gallows.

Like most of the posts in this series, I have concentrated on the origins of this city. There is a lot more to the history of Victoria. One good place to find more information is Wikipedia. I will wrap up this whole series on Saturday or Sunday when I get back home.

Next Pos: Alaskan History Cruise, Part Seven - Back in Seattle
Posted by M at 9:26 AM