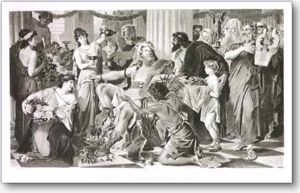 Who was the leader that sacked Rome? His name was Alaric. And he has an interesting biography.

A nobleman, Alaric served as a commander of Gothic troops in the Roman army. After the death of the emperor Theodosius I in 395, he left the Roman military and was elected king of the Visigoths. He then promptly fabricated an excuse and attacked the Eastern Roman Empire. He was repulsed before reaching Constantinople but he ravaged a large portion of Greece as a consolation prize.

Alaric twice invaded Italy but was defeated both times. However, his third invasion worked like a charm. Riccardo Cigola wrote about what happened, "The Visigothic laid siege to Rome (408) until the Senate granted him another subsidy and assistance in his negotiations with Honorius. Honorius remained intransigent, however, and in 409 Alaric again surrounded Rome. He lifted his blockade after proclaiming Attalus as Western emperor. Attalus appointed him magister utriusque militiae ("master of both services") but refused to allow him to send an army into Africa. Negotiations with Honorius broke down, and Alaric deposed Attalus in the summer of 410, besieging Rome for the third time. Allies within the capital opened the gates for him on August 24, and for three days his troops occupied the city, untouched by a foreign enemy for nearly 800 years. The emotions about ruined Rome were partly expressed in the City of God by St Augustin."

Alaric did not survive his triumph over Rome long. While contemplating an invasion of Roman Africa, he died. It was still 410 A.D. and he had not survived the year he sacked Rome. His death was rumored to have been caused by a fever but many Christians attributed the death to God's vengeance.

Miles H. Hodges wrote of his legacy, "Despite his ultimate failure at establishing some kind of Gothic regime of his own, Alaric left an huge mark on his age. Principally, he had exhausted the Roman resistance in the West, and opened the way for the German Vandals and Suebi to invade Gaul and Spain. It was his marauding of Rome that also caused the withdrawal of the Roman legions from Britain--leaving that land vulnerable to the invading Picts to the North and the Saxons to the East."
Posted by M at 11:26 AM

You have just helped me considerably with my Western Civ. project. Thanks muchly!

Ann Rice book, "Blood and Gold" speaks at length and in detail of the sack of Rome with Alaric