Imperium: A Novel of Ancient Rome 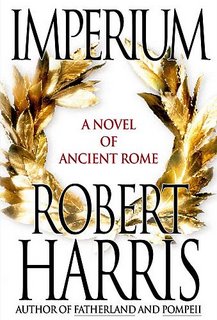 I just finished reading Imperium: A Novel of Ancient Rome. I am not a big fiction fan but I do read the occasional historical fiction or fantasy novel. I do not always like them. However, I found this book by Richard Harris to be excellent.

The book tells the story of Cicero in his early days in the Senate from 79 B.C. to 64 B.C. It highlights many of the actions of his rise to prominence in Rome including a good account of his successful prosecution of the former governor of Sicily, Verres. The book ends with Cicero's election as a Consul so there is plenty of room for a sequel.

The story is written from the point of view of Cicero' slave Tiro who himself is noted in history. He is credited with inventing shorthand so he could keep up with Cicero's frenzied dictations and speeches. Tiro also wrote a well regarded biography of Cicero which has been lost to history but is cited by other ancient historians.

Harris does try to make parallels between the days of the late Roman Republic and today without actually mentioning modern events. He writes in language which makes Pompey's successful passage of laws to have himself made sole military commander to fight the pirate menace seem to parallel the Bush Administration's laws and arguments to fight modern terrorism. The comparison of the two events separated by thousands of years is weak but will probably please those who think any historical event which can be made to conform to their current political views is "good history" and any historical analogy that disagrees with them is "bad history". Fortunately, Harris allows the reader to make this connection on his or her own and does not try to push this aspect of the book to far.

The book is obviously well researched. The details regarding Cicero's prosecutorial fact finding trip to Sicily and the trial of Verres show a great deal of scholarly searching on the part of Harris to write an accurate account. This is a short read (only 305 page) with a very readable author so I would recommend this book to ancient history fans.
Posted by M at 3:57 AM