Did Julius Caesar Decimate a Legion? 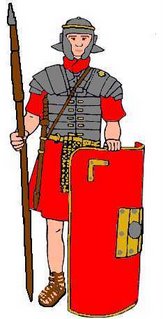 I have been watching the The Battle for Rome miniseries on the Discovery Channel. While uneven in quality, I have enjoyed the six episodes I have watched. However, I think I have found a huge error in the episode on Julius Caesar.

The Caesar episode recounts the story of the 9th Legions mutiny during the Great Roman Civil War. Some of the men wanted to be discharged but most wanted more pay. The episode shows a stern Caesar order the 9th to be decimated. Decimation was a rarely used form of punishment. Jona Lendering at Livius described this, "After a very serious offense (e.g., mutiny or having panicked), the commander of the commander of a legion would take the decision, and an officer would go to the subunit that was to be punished. By lot, he chose one in ten men for capital punishment. The surviving nine men were ordered to club the man to death. "

The Battle for Rome episode shows the 9th being decimated while a grim faced Caesar looks on. The scene is very powerful as we see a man being beaten to death while another looks on knowing he is next. However, the story is not true. This television show is wrong.

Caesar never ordered that the 9th be decimated. They did indeed mutiny demanding more pay. Caesar went to the soldiers.

Adrian Goldsworthy in Caesar: Life of a Colossus describes what happened, "He (Caesar) then announced that he intended to decimate the Ninth, an ancient punishment that involved selecting by lot one out of every ten men to be beaten to death by his comrades. The remainder of the legion would be dishonourably discharged from the army. The veteran soldiers were dismayed and their officers began to beg their stern commander for mercy. Caesar knew how to work a crowd and gradually gave ground, finally saying that 12o ringleaders would need to draw lots to choose twelve men to be executed. The selection is supposed to have been rigged to ensure the names of the main troublemakers were drawn" (p. 407).

Caesar did not kill hundreds of his soldiers in a decimation punishment. He cleverly put the fear of the gods into the legion by threatening such a punishment before then having the actual guilty individuals put to death. As putting soldiers engaged in mutiny to death is normal even through the 20th century, this is a measured and perhaps appropriate response on Caesar's part.

Compare this with how the French put down mutinies during World War 1. According to The French Army Mutinies of World War I (http://crf-usa.org/bria/bria17_3.htm), "With the support of Petain, officers punished mutinous troops by court-martialing the leaders. When they often couldn't determine the leaders, they sometimes chose known troublemakers, men with civilian criminal records or those who complained a lot. Or they followed Taufflieb's example and selected every 10th or 20th man standing in the ranks." And the French executed many of those found guilty even some that were randomly selected from a mutinious unit.

Why did the Battle of Rome episode get this wrong? Was it poor research on the part of the show writers? Or was it just an attempt to show that Caesar was a stern and brutal commander? Or perhaps this was an attempt to show Caesar in a bad light? Regardless, it is bad history and many viewers are going have an incorrect version of history and Caesar after having watched this show.
Posted by M at 7:00 AM

Oh foolish historian-
This treatment simply makes better show biz. Documentaries don’t get made for free after all, you need to attract an audience and good hook always helps. At the same time, you get to correct a popular fallacy. People abuse 'decimation' as a synonym for being 'nearly wiped out'. Hey, we have a chance to show the world what it really was, while increasing our ratings! Score!
When would a film maker get a chance to stage such a spectacle again and get to teach such a lesson at the same time? Cite them for a minor infraction of their artistic license and let them go on their way.

But the truth does make a better story for the written word. Crafty guy, that Caesar. Thanks for the correction.

I realize quite some time has past since your espial of the Discovery Channel's "documentary" on rome; however, I would still like to extend my sincere gratitude for your efforts. For all of us who still prize dutiful scholarship and the love of truth over the baneful charades of modern media, the aforementioned revelation will always hold value beyond that of any rating, no matter how lucrative it is held among the cretinous. Sincerely,
BMS - Philadelphia, PA

I just happened upon your long-ago post about the Discovery channel's historical inaccuracy while doing a Google search to remind myself which of Caesar' legions mutinied. I agree, it's jarring and ruins the enjoyment of historical presentations when they get the obvious wrong.

I have been watching a series called "Rome" and am thoroughly amazed that it seems to get most everything right, from historical points to the actors' characterizations of major figures. The most glaring misstep was a comment by Caesar that he doesn't mess with priestly things. In fact, Caesar was Pontifex Maximus. The series can be found at http://tvliveshows.com/rome/

The pages with the video files have redirects to some kind of "sign up for Vango" page. If you get the timing just right, you can stop the page from loading before it redirects. Then you can see the video without signing up. Sometimes it takes a few tries. But I recommend the series for folks who take an interest in Caesar's life.

Hi, there are numerous flaws in this program. Firstly, it mentions that Mark Antony had been with Caesar for 10 years, which is wrong, secondly it depicts Marcellus as still being consul when Caesar attacked, but his consulship had ended and another Marcellus was consul with Lentulus Crus. That is just off the top of my head though there were many more. Other things which were distorted for drama were the battle of Alesia, where Labienus had acted surprised when the Gallic relief army showed up when the whole strategy was based on that fact etc. The documentary was entertaining but historically extremely flawed.

Another comment on Caesar in the HBO series Rome, when he indicates that he is only reluctantly putting on a triumph to please the common people. The triumph was the highlight of a Roman general's career and many generals went to great lengths to earn one, sometimes unsuccessfully, such as Marcus Licinius Crassus at Carrhae.