This is a reminder that History Carnival #26 will be posted at the World History Blog (here!) on March 1st. I plan on writing the carnival post on February 28th. Realistically, if you want a submission considered, it would be best to get it to me before that date. Full details on the History Carnival and how to submit can be found at http://world-history-blog.blogspot.com/2006/02/call-for-contributions-history.html.

Thanks to the dozens of people (especially Sharon Howard!) who have already sent me lots of great posts to consider.
Posted by M at 12:48 PM No comments: Links to this post

Does Jailing Historical Revisionists Ultimately Strengthen Their Cause?

Does Jailing Historical Revisionists Ultimately Strengthen Their Cause? Recently, Holocaust denier and historical revisionist David Irving was put in jail in Austria. His crime was making two speeches where he advanced his revisionist version of 20th Century history. While I clearly disagree with Mr. Irving's historical claims, I am troubled by the fact that we was thrown in prison for them. For more on this, see Irving strikes defiant note from his Austrian jail cell.

The Holocaust is one of the best documented events in history. The physical evidence coupled with oral history is overwhelming. It happened. Holocaust deniers can stand on their heads and shout until judgment day yet they will be unable to disprove the fact that this terrible event occurred. At best, they will claim conspiracy theories, be selective in the documents they cite, and look for flaws in individual testimonies or news accounts to try to throw doubt on all testimony and all news reports.

So why are Holocaust deniers being thrown in jail? They are wrong and they have a right to be wrong. This is not the case in the Middle East or China perhaps but it is in the West. I am astonished that Austria would throw someone in jail for spouting off bad history.

Should we throw other historical revisionist in jail? Should we also throw Heribert Illig in jail for claiming that Charlemagne and that 300 hundred years of medieval history never existed? How about those "historians" who claim that the Apollo Moon Landings were faked or those who make historical assertations that lead to claims that Hawaii and Texas are independent nations undergoing illegal military occupation by the USA? Maybe we should jail Anatoly Timofeevich Fomenko for his radical and wrong New Chronology Hypothesis which claims that nothing can be dated prior to the 11th Century? There are a lot out there as well denying the Armenian Holocaust...

The big danger in jailing (or otherwise legally sanctioning revisionist speech) is that it may ultimately help the cause of the revisionist. They will ask, "If we are wrong, why will you not allow us to speak? The very fact that you are jailing us proves you have something to hide." And this question from the revisionists will find fertile grounds on the Web.

I guess I am even concerned more long term. What if there are wars or other disasters which destroy much of the evidence which proves the Holocaust? Evidence is lost through time and there is no guarantee that the future will be only bright and good. A millennium from now, there will be no survivors to speak in person. Historians in the future may well point to the suppression of speech on the topic that perhaps there was evidence to support that the Holocaust never happened.

I think we should let all historical revisionists (Holocaust deniers included) speak all they want. They may be gadflys but the bulk of evidence is not on their side. They are on the fringe and they will stay there. Let their websites stay up and let them give all the presentations they want. In the meantime, historians can continue to monitor these individuals and make the appropriate responses when it it warranted.
Posted by M at 5:22 AM 7 comments: Links to this post

History of Montserrat. This is a brief history of this small island recently best known for volcanic activity.

Wikipedia notes, "Montserrat is a lush, mountainous island in the Caribbean Sea, located in the Leeward Islands, part of the chain of islands called the Lesser Antilles. Montserrat was given its name by Christopher Columbus on his second voyage to the New World in 1493, after a mountain of the same name located in Spain. Montserrat is often referred to as the Emerald Island of the Caribbean due both to its resemblance to coastal Ireland, and to the Irish descent of most of its early European settlers."

The island was discovered by Columbus in 1493, who named it after Monserrado, a mountain in Spain. Despite claiming the island, the Spanish did not colonize it and English and French interest grew. Charles I granted a patent to allow colonization in 1625.

The first european colony was established in 1631 when Irish Catholics were forcibly moved to there and Antigua to prevent them from siding against English protestants on St Kitts. After Oliver Cromwell's defeat of the Irish at the Battle of Drogheda, Irish political prisoners were transferred to Montserrat. A new fort at Kinsale was built. In 1655, Cromwell himself was entertained on Montserrat. Montserrat was hit by hurricanes in 1657 and 1658.

A Collection of Contracts from Mesopotamia

This text is part of the Internet Ancient History Sourcebook. The Sourcebook is a collection of public domain and copy-permitted texts related to medieval and Byzantine history. This particular pages was taken from George Aaron Barton, "Contracts," in Assyrian and Babylonian Literature: Selected Transactions, With a Critical Introduction by Robert Francis Harper (New York: D. Appleton & Company, 1904), pp. 256-276

I was taken with how modern some of the legal language used in the contracts sounded. For example, here is a contract for a real estate sale:

I found some of the legal language for the sale of slaves a bit questionable. The contract language reads:

How exactly could the seller assure the buyer that the slaves would not be insubordinate? If they misbehaved, was there a money back promise? How long did such a guarantee last? How could the buyer prove that the product (slave) was defective, i.e. that the actions of a slave warranted a refund?

I guess these contracts show that lawyers have always been assured a steady stream of business despite the culture or the historical time that they have lived.
Posted by M at 12:50 PM 1 comment: Links to this post

Getting the Message Out 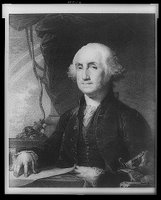 In honor of the holiday, I have blogged Getting the Message Out. It is an exhibition examining the national popular political culture in the antebellum United States through campaign materials from presidential campaigns from 1840-1860. The site includes histories, biographies, and primary source material such as campaign biographies and campaign songbooks, as well as song recordings, images, and teachers' guide.

Getting the Message Out! National Political Campaign Materials, 1840-1860 presents an examination of national popular political culture in antebellum America. It includes histories of the presidential campaigns from 1840-1860, as well as primary source material, such as campaign biographies and campaign songbooks. Recordings of some of the songs are also available.

This project was made possible by a generous grant from the Institute for Museum and Library Services and is provided by the Abraham Lincoln Historical Digitization Project at Northern Illinois University Libraries.
Posted by M at 9:54 AM No comments: Links to this post