A couple of good links noted include:

History, Chronology and the Bible - This features a well developed bibliography of materials that homeschooling Christians could use to help their children understand ancient history. The links do not include Amazon (or other) affiliate links meaning the author posted this without an attempt to make a few dollars.

Can An Obscure President Become a Lesson in Character? Good tips on teaching primary grade students on an obscure president (Chester Arthur) who actually maybe was not so obscure as character (and ethics) count.
Posted by M at 4:05 AM No comments: Links to this post 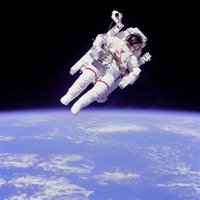 History of Manned Space Missions. This site is a chronological listings of American and Soviet manned missions from 1961-1993. It includes dates, crew biographies, and mission highlights.

While not extensive, there are brief notes on each mission and each astronaut or cosmonaut. For example, the Soyuz 21 (USSR) mission of 1976 is described as, "The two cosmonauts spent 49 days in space for a mission devoted to manufacturing and military stuff. They returned three weeks early due to physical and psychological problems."

Some of the astronaut profiles have more details. The biography of Tom Akers notes, "Tom Akers is an American astronaut who was born on May 20, 1951 in Missouri. Before he was an astronaut, Akers was a park ranger, teacher, and Air Force pilot. He has flown 25 different types of aircraft. Akers became an astronaut in 1987. He has flown four flights and has logged over 800 hours in space. In 1990, he flew aboard STS-41, where he helped put a probe into space. In 1992, he flew aboard the new shuttle, Endeavour and made four spacewalks. In 1993, Akers flew on the STS-61 mission where he helped repair the Hubble Space Telescope. Akers broke a U.S. record by spending 29 hours and 40 minutes in spacewalks on a single flight. In 1996, Akers flew aboard the STS-79, where he visited the Mir space station."

This is a nice quick ready reference resource for finding details about historic manned space missions. I hope that those responsible for the Windows to the Universe site where this resides will update the resource to cover the last 13 years soon.
Posted by M at 6:17 AM No comments: Links to this post

Banishing The Myths. This is an article from Time (MARCH 16, 1998 VOL. 151 NO. 10) which examines the politics of South America from the legacy of General Augusto Pinochet Ugarte. It was written by Mario Vargas Llosa.

The article blurb noted , "The stereotypes that Pinochet generated after his coup still haunt the political future of Latin America."

I find this article interesting eight years later. At the time it was written, military rulers seemed to be on the comeback in South America. Times have changed. Now, the Socialists are gaining power in country after country in South America. Recently, left of center leaders have been elected in Bolivia, Uruguay, Chile and Venezuela. Some of it can be pegged to the normal cycle of anti-Americanism that periodically sweeps the region but clearly part of it is a rebellion against the tradition of military rule in South America too.

Still, one has to wonder how long this will last and the miltary comes back in vogue. As the article noted, "Some still vividly remember the social anarchy (hyperinflation, expropriation, land invasions and violent confrontations) caused by the socialist..."
Posted by M at 5:34 AM No comments: Links to this post

The Settlement of Polynesia

Some of the islands of Oceania were among the last habitable land areas on Earth to acquire a human population. The essay notes the following dates for some migrations:

- Around 1600-1200 B.C., a cultural complex called Lapita spread from New Guinea in Melanesia as far east as Fiji, Samoa, and Tonga. Polynesian culture developed at the eastern edge of this region (i.e., in Samoa and Tonga).

- Around 300 B.C. or earlier, seafarers from Samoa and Tonga discovered and settled islands to the east of the Cook Islands, Tahiti-nui, Tuamotus, and Hiva (Marquesas Islands).

- Around 300 A.D. or earlier, voyagers from central or eastern Polynesia, possibly from Hiva, discovered and settled Easter Island.

- Around 400 A.D. or earlier, voyagers from the the Cook Islands, Tahiti-nui, and /or Hiva settled Hawai'i.

- Around 1000 A.D. or earlier, voyagers from the Society and/or the Cook Islands settled Aotearoa (New Zealand).

Frankly, I find it amazing that some of these remote islands were settled at all at the times they were. Travel by canoe over the vast Pacific Ocean was a Herculian sized feat and I have nothing but admiration for the colonists who settled in places like Easter Island, Hawaii, and the Cook Islands.
Posted by M at 6:55 AM No comments: Links to this post

History of Mexio. This essay features a history of the North American nation of Mexico. It uses information from both the 1907 Catholic Encyclopedia and US State Department Background Notes.

Wikipedia notes, "The United Mexican States or Mexico (Spanish: Estados Unidos Mexicanos or México; is a country located in North America, bordered by the United States to the north, and Belize and Guatemala to the southeast. It is the northernmost and westernmost country in Latin America, and also the most populous Spanish-speaking country in the world. The country is often referred to by Mexicans as the Mexican Republic (Spanish: República Mexicana) although this is not the officially recognised title. The term State of Mexico (Spanish: Estado de Mexico) does not refer to the country, but only to one state within Mexico, located near the centre of the country adjacent to the Federal District."

Highly developed cultures, including those of the Olmecs, Mayas, Toltecs, and Aztecs existed long before the Spanish conquest.

The chronology and historical documents of the Aztecs give us a more or less clear account of their history for eight centuries prior to the conquest, but these refer only to their own history and that of the tribes living in close proximity to them, little or nothing being said of the origin of the Otomies, Olenques, Cuitlatecos, and Michoacanos.

According to Clavijero the Toltecs came to Mexico about A.D. 648, the Chichimecs in 1170, and the Aztecs in 1196. That their ancestors came from other lands, is asserted by all these tribes in their traditions, and the north is generally the direction from which they claim to have come. It seems probable that these first immigrants to Mexico came from Asia, either by way of Behring Strait, or across the Pacific Ocean. The theory that these people had some close connextion with the Egyptians and other peoples of Asia and Africa has some substantiating evidence in the ruins still extant, the pyramids, the exact and complicated method of computing time, the hieroglyphics, and the costumes (almost identical with those of the ancient Egyptians), seen in the mural paintings in the ruins of Chichen-Itza. It seems that the Otomies were one of the oldest nations of Anahuac, and the Itzaes of Yucatan. These were followed by the Mayas in Yucatan, and in Anahuac the Toltecs, the Chichimicas, and Nahoas, with their seven tribes, the Xochimilcas, Chalcas, Tecpanecs, Acolhuas, Tlahuicas, Tlaxcaltecs, and Aztecs.
Posted by M at 10:50 AM No comments: Links to this post

Weapons of Medieval Destruction. Information on medieval siege weapons which were the "wmd" of their time!

These weapons were definitely the equivalent (with reduced range of course) of modern weapons of mass destruction. The site notes how these weapons were used for biological and psychological warfare, "These weapons were used for launching rocks, or anything else that came to hand, into or over castle walls. They were used in the first instances of biological and psychological warfare- firing dead animals over the walls into the castle to possibly spread disease, and they were sometimes used to 'repatriate' spies, captured soldiers or messengers back into the castle! Froissart mentions in his chronicles of an English messenger at the siege of Auberoche in 1334 being launched back into the castle with his letters tied to him!! Bee hives and burning tar have also been used as missiles. "
Posted by M at 10:34 AM No comments: Links to this post