The Library Legacy of Andrew Carnegie 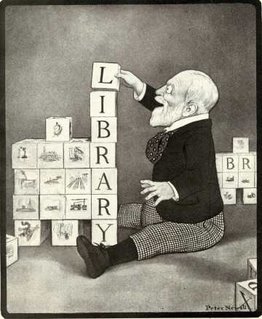 There are a total of 23 links divided into a general section and then by specific sites. The main site (The Library History Buff) looks good as well and would be of interest to those interested in the history of libraries.

The public domain cartoon above is from Harper's Weekly April 11, 1903. According to Nix, the following caption accompanied it. "We men are only lusty boys, Though snowy be our locks, So Skibo's master still enjoys, To sit and play with blocks."
Posted by M at 11:30 AM 1 comment: Links to this post

In the first century AD, two far-flung but related events helped stimulate Malaysia's emergence in international trade in the ancient world. At that time, India had two principal sources of gold and other metals: the Roman Empire and China. The overland route from China was cut by marauding Huns, and at about the same time, the Roman Emperor Vespasian cut off shipments of gold to India. As a result, India sent large and seaworthy ships, with crews reported to have numbered in the hundreds, to Southeast Asia, including the Malayan Peninsula, to seek alternative sources. In the centuries that followed, rich Malaysian tin deposits assumed great significance in Indian Ocean trade, and the region prospered. As maritime trade among Middle Eastern, Indian, and Chinese ports flourished, the peninsula benefited from its location as well as from development of its diverse resources, including tropical woods and spices. Malay ships became prominent in that trade, and Malay ports served as transshipment centers. Indian trade brought Indian culture, economy, religion, and politics, with historic results for what is now Malaysia.

The early Buddhist Malay kingdom of Srivijaya, based at what is now Palembang, Sumatra, dominated much of the Malay peninsula from the 9th to the 13th centuries AD. The powerful Hindu kingdom of Majapahit, based on Java, gained control of the Malay peninsula in the 14th century. Conversion of the Malays to Islam, beginning in the early 14th century, accelerated with the rise of the state of Malacca under the rule of a Muslim prince in the 15th century. Malacca was a major regional entrepot, where Chinese, Arab, Malay, and Indian merchants traded precious goods. Drawn by this rich trade, a Portuguese fleet conquered Malacca in 1511, marking the beginning of European expansion in Southeast Asia. The Dutch ousted the Portuguese from Malacca in 1641 and, in 1795, were themselves replaced by the British, who had occupied Penang in 1786.

In 1826, the British settlements of Malacca, Penang, and Singapore were combined to form the Colony of the Straits Settlements. From these strongpoints, in the 19th and early 20th centuries the British established protectorates over the Malay sultanates on the peninsula. Four of these states were consolidated in 1895 as the Federated Malay States.
Posted by M at 7:11 AM No comments: Links to this post

Seven Wonders of the Medieval World

Did you know that Wikipedia deletes articles? It is true. It appears as though many contributed articles are vanity, silly, or just plain weird. These get deleted at a special place of Wikipedia called Wikipedia: Articles for Deletion. There, editors vote on the merit of articles and eliminate those which fail to pass the test.

One article currently being debated is Seven Wonders of the Medieval World. There is also a proposal to merge this with another article. I am not sure this deserves being deleted. It is also the only candidate for deletion related to history I could find. Therefore, I will feature it here. It may vanish from Wikipedia soon.

Seven Wonders of the Medieval World

Other sites that have been mentioned include:

It is unlikely the list originated in the Middle Ages. Brewer's calls it a "later list"[5]. The word medieval was invented by Enlightenment-era authors, and the concept of a "Middle Ages" did not develop until 15th century humanists at the very earliest. The Romanticism movement in the 19th century glorified all things related to the Middle Ages, or more specifically anything pre-Enlightenment era.

This article is licensed under the GNU Free Documentation License. It uses material from the Wikipedia article "Seven Wonders of the Medieval World".
Posted by M at 7:44 PM 1 comment: Links to this post 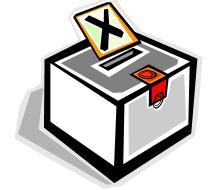 Teaching about Democratic Constitutionalism. To my American readers, happy election day. Go out and vote. Further, if you are an educator at any level (pre-school, primary, secondary, post-secondary) please let your student know that you voted. Talk about it and be sure to stress the importance of voting in a constituional democracy.

This ERIC Digest from 1997 may gave you some ideas on how to teach the concept in class. It was written by John J. Patrick and published by the now defunct ERIC Clearinghouse for Social Studies/Social Science.

Constitutionalism means limited government and the rule of law to prevent the arbitrary, abusive use of power, to protect human rights, to support democratic procedures in elections and public policy making, and to achieve a community's shared purposes. Constitutionalism in a democracy, therefore, both limits and empowers government of, by, and for the people. Through the constitution, the people grant power to the government to act effectively for the public good. The people also set constitutional limits on the power of the democratic government in order to prevent tyranny and to protect human rights (Holmes 1995, 299). The rights of individuals to life, liberty, and property are at risk if the government is either too strong or too weak. Both tyranny and anarchy pose critical dangers to security for individual rights.

An effective democratic constitutional government is sufficiently empowered by people to secure their rights against foreign invaders or domestic predators. Its power is also sufficiently limited by people to secure their rights against the possibility of oppressive government officials. A continuing challenge of democratic constitutionalism is determining how to simultaneously empower and limit the government in order to secure the rights of all persons in the polity.

NOVA: Lost at Sea - The Search for Longitude

NOVA: Lost at Sea - The Search for Longitude. Companion to the PBS special about the quest for a method of determining a seafaring ship's longitude. This site has information on why ocean navigation depends on knowing what time it is. In addition, it has the story behind the manufacture of John Harrison's marine timekeepers in the 18th century which allowed for the measurement of longitude.

The site has a teacher's guide, a find your longitude game, Secrets of Ancient Navigation, and information on GPS.

Welcome to the companion Web site to "Lost at Sea: The Search for Longitude," originally broadcast on October 6, 1998. Based on the bestselling book Longitude by Dava Sobel, the program tells the story of how an unknown genius, John Harrison, discovered the key to navigating on the open seas and thus solved one of the thorniest problems of the 1700s.
Posted by M at 10:48 AM No comments: Links to this post