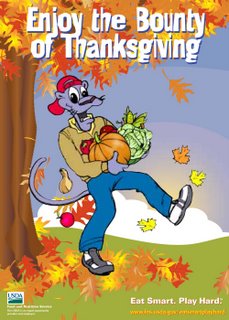 This will be my last blog post until next Monday. I will be traveling for the American Thanksgiving holiday and will have limited internet access. Despite the stress of travel, I hope I can watch football, drink beer, and enjoy my extended family.

On the left, I have posted a public domain poster from the United States Department of Agriculture.

Here are a few sites on Thanksgiving if you want to learn about the history of the day:

Cartoon Fun and History of Thanksgiving - A teddy bear cartoon involving spaghetti for Thanksgiving, plus some educational information on the traditions and symbols.

Unbiased Teaching about American Indians and Alaska Natives in Elementary Schools - Has some information on debunking common Thanksgiving myhts.
Posted by M at 7:52 AM No comments: Links to this post

History of Macedonia. This is a brief history of the modern European nation of Macedonia. As the Government of Greece will point out, modern Macedonia is not quite the same as ancient Macedonia.

The Encyclopædia Britannica notes, "Country of the southern Balkans. It is bordered to the north by Serbia, to the east by Bulgaria, to the south by Greece, and to the west by Albania. The capital is Skopje."

Throughout its history, the present-day territory of Macedonia has been a crossroads for both traders and conquerors moving between the European continent and Asia Minor. Each of these transiting powers left its mark upon the region, giving rise to a rich and varied cultural and historical tradition.

The ancient territory of Macedon included, in addition to the areas of the present-day Macedonia, large parts of present-day northern Greece and southwestern Bulgaria. This ancient kingdom reached its height during the reign of Alexander III ("the Great"), who extended Macedon's influence over most of Asia Minor, the Levant, Egypt, Mesopotamia, Persia, and even parts of India. After Alexander's death in 323 BC, the Macedon Empire gradually declined, until it was conquered in 168 BC and made a province by the Romans in 148 BC.

After the fall of the Western Roman Empire, the territory of Macedonia fell under the control of the Byzantine Empire in the 6th and 7th centuries. It was during this period that large groups of Slavic people migrated to the Balkan region. The Serbs, Bulgarians, and Byzantines fought for control of Macedonia until the late 14th century, when the territory was conquered by the Ottoman Turks; it remained under Turkish rule until 1912.