A Royal Pardon for the British Witches? 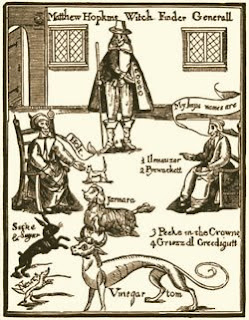 Over 400 people (mostly women) were legally executed for witchcraft in Britain until 1735. In retrospect, most of these people were probably not witches. Further, even if they were, it is unfair that they were killed for their personal religious beliefs. This has resulted in a campaign to have these "witches" given royal pardons.

The site http://www.pardonthewitches.com/ has some more details:

On 28th of August 2008, the Swiss Parliament granted an official pardon to Anna Goeldi who in 1782 was the last person to be executed as a witch in Western Europe. It is time the British government followed this example and this Halloween offered a symbolic pardon to those people who were punished for witchcraft in Britain between the Sixteenth and Eighteenth Century.

Angels, the UK's largest Halloween retailer, has consulted with historian and witchcraft expert John Callow to prepare eight historical test cases that aim to remove the suspicion and fear that continues to surround these innocent women (and one man). Please fill in the petition below to see your name added to the list that will be presented to Justice Minister Jack Straw MP on Halloween 2008 asking him to recommend the Queen issues a posthumous pardon.

Over 400 women were executed in England alone following accusations of witchcraft. These women - often on the margins of society on account of their sex, poverty and age - found themselves used as the outlet for a wide range of unrelated social issues, from religious tension sweeping the nation during the Civil War to more localised problems such as crop failure. Often it was enough for a child to fall ill for a local woman to become the subject of a whispering campaign that could lead to an accusation of witchcraft. During the period, trials were conducted using official assizes presided over by the same circuit judges that tried people charged of non-supernatural crimes. They often used evidence obtained by duress or torture to justify the death sentence.

Eight test cases are being advanced to help with the pardon request. I am convinced this is worthwhile even if the victims can not appreciate it. Miland Brown has added his name to the petition.
Posted by M at 12:01 AM 2 comments: Links to this post

An archaeologist is claiming to have found Hebrew text from over three thousand years ago. It dates from the time of King David and was found on a shard of pottery. An article from CNN (titled Archeologist finds 3,000-year old Hebrew text) has the details.

Professor Yosef Garfinkel of the Hebrew University of Jerusalem says the inscribed pottery shard -- known as an ostracon -- was found during excavations of a fortress from the 10th century BC.

Carbon dating of the ostracon, along with pottery analysis, dates the inscription to time of King David, about a millennium earlier than the famous Dead Sea Scrolls, the university said.

The shard contains five lines of text divided by black lines and measures 15 by 15 centimeters, or about 6 inches square.

Archaeologists have yet to decipher the text, but initial interpretation indicates it formed part of a letter and contains the roots of the words "judge," "slave," and "king," according to the university. That may indicate it was a legal text, which archaeologists say would provide insights into Hebrew law, society, and beliefs.

The researchers say the text was clearly written by a trained scribe.

As noted by the article, Hebrew evolved a lot in a thousand years. It is not surprising that Hebrew changed so much from three thousand years ago and two thousand years ago. Languages change and evolve. This would probably shock one of the local English language grammar patrollers here in my town. She writes a weekly newspaper column criticizing anyone who writes or speaks differently than her. I note though that she does not speak or write proper Old English. I guess she missed the fact that the language changes and some of her musings are a futile attempt to prevent the evolution of English.

This is a nice find in the Middle East. Congratulations to Dr. Garfinkle.
Posted by M at 7:20 PM No comments: Links to this post

Ancient Iceman Probably Has No Descendants or Relatives

The famous iceman of Italy has some new news. He may have no relatives in the modern world. It appears his particular DNA is now extinct. An article at Yahoo! titled Ancient iceman probably has no modern relatives has the details.

"Otzi," Italy's prehistoric iceman, probably does not have any modern day descendants, according to a study published Thursday.

A team of Italian and British scientists who sequenced his mitochondrial DNA -- which is passed down through the mother's line -- found that Otzi belonged to a genetic lineage that is either extremely rare or has died out.

"Our research suggests that Otzi's lineage may indeed have become extinct," Martin Richards of Leeds University in Britain, who worked on the study, said in a statement.

The Wikpedia article on Ötzi the Iceman writes, "Ötzi the Iceman (pronounced [ˈœtsi], Frozen Fritz, and Similaun Man are modern nicknames of a well-preserved natural mummy of a man from about 3300 BC (53 centuries ago),[1] found in 1991 in the Schnalstal glacier in the Ötztal Alps, near Hauslabjoch on the border between Austria and Italy. The nickname comes from Ötztal, the region in which he was discovered. He is Europe's oldest natural human mummy, and has offered an unprecedented view of Chalcolithic (Copper Age) Europeans."

Evidence shows that the iceman died from an arrow wound. It is possible that he died as a result of warfare. Perhaps this same war resulted eventually in the genocide of his relatives? It is impossible to tell but I find it interesting that none of his relatives are appearing in DNA today.
Posted by M at 7:19 PM 2 comments: Links to this post