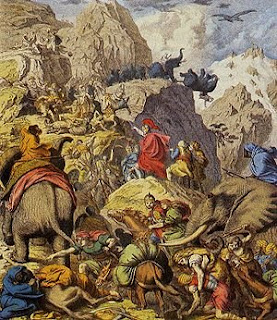 The History Channel has a new series. And amazingly, it has nothing to do with the occult, monsters, UFOs, or Hitler! It is called Battles BC. The first episode was on last night and it was titled Hannibal: The Annihilator.

Here is a description from the official site:

Hannibal's merciless attacks on Roman soil dealt a near fatal blow to the soon-to-be Empire. Sworn by his father to a blood oath against the Romans, Hannibal of Carthage does the unthinkable... he marches 40 war elephants and a massive army over the Alps to gain an element of surprise. In three key battles--Hannibal uses terrain, intimidation and his iron will to annihilate the Roman Legions, killing every Roman soldier that he possibly can.

The show has flashy background and sound track which reminded me of 300. I am sure this was done intentionally. It also offered commentary from four interesting experts whose words were blended smoothly together by the editing.

The bulk of the episode deals with Hannibal's early life, the beginning of the Second Punic War, Hannibal crossing the Alps, and his early battles in Italy. Several battles which Hannibal won in convincing fashion are described and analyzed in detail. However, the episode basically ends with the Roman disaster at Cannae.

I wish the episode had put the battles covered in the larger context of the Second Punic War. Better coverage of the later years of the war, including his defeat in North Africa at the Battle of Zama, would have left viewers with a better understanding of Hannibal's life and legacy. Nonetheless, the show was entertaining and educational. I will plan on watching future episodes.

But I thought the H stood for Hitler! They're going to have to get a new name now! :--)

I wrote them a letter once and told them they should change their name to the Twentieth Century War Channel.

This is, at least, History from more than 5 centuries ago. Maybe one day they'll show stuff that doesn't glorify the military industrial complex...

I plan on watching

Groovy, man. I haven't seen that term used since I tuned, in turned on and dropped out.

I have read and learned about Hannibal in the classroom. He had seemed like a powerful and witted man. Everytime the Romans would come and try to attack him, he would always have the smarts to defeat them. He was winning everytime they had fought. His last battle he had lost with honor. I do agree that if they would have covered his entire campaign.

"Groovy, man. I haven't seen that term used since I tuned, in turned on and dropped out."

This show has got to be the most moronic thing I have ever seen.

There is no mention of Numedia cavalry, but numerous mentions of Celtic heavy cavalry are made...

And most significantly Hannibal and his troops, are portrayed as a Negros. Hannibal is portrayed a a very large back man, a naked one at that, wearing only a rag...
There is no mention to the loss of his eye. Yet a mention that he assassinated his father...
This is a joke. Please do not watch it.
I guess it's politically correct o portray Hannibal as a black man, maybe tomorrow they can have a black William the Conquerer or maybe a white Zulu tribe.
I do not know what this is but it certainly is not history.

i watched the show last night. i was fascinated by jis campaign. too bad he failed his mission. he wasnt able to raise rome to the ground. if that happened. rome wont be a super power of the ancient world and who knows what would happen to or modern world.!

i watched the show last night. i was fascinated by jis campaign. too bad he failed his mission. he wasnt able to raise rome to the ground. if that happened. rome wont be a super power of the ancient world and who knows what would happen to or modern world.!

@ Cato
This may come as a great surprise to you,BUT, history is not white! You, your entire ilk, whitewash history because you fear or don't want to admit that people of color, especially people of African and African descent are capable of doing tremendously great things and accomplishments!

his comment had nothing to do with racism he has just stated that hannibal was protrayed wrong in the tv show and shouldn't be protrayed as the wrong ethnicity i mean what if they protrayed hitler as a latino or an asian would you want that knowing that it is wrong? alright well i'm going to get off here

ya hannibal had the best theroy of battle ever, see people not on your team and chop them into tiny little pieces.
yay!