Dogs and Their History 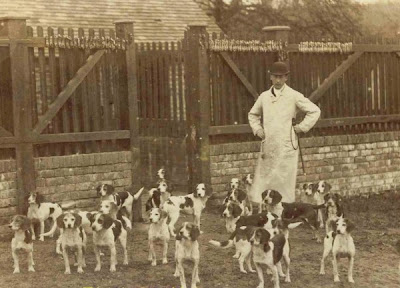 I am posting yet another of those free to use Ezinearticles.com articles. I find one occasionally I like and since blogs are allowed to reprint them free...

Here is the article:

Dogs and Their History By Steven Weber.

It is amazing how many different shapes, sizes, colors, and types of dogs there are. And it is even more amazing considering they all came from the same ancestors. The story of dog history says that early humans took in wolves for pets. Perhaps they discovered these wolves could be fed and kept close in return for their "watch dog" or hunting ability. This could have been handy in keeping other predators at bay around the camp at night.

Not to mention that early humans probably found wolf puppies to be adorable in the same way modern humans all seem to have a built in affection for puppies. One problem with studying dog history has been the fact that there are only slight differences in jackals, coyotes, and wolves.

Where and when these different canids branched off from the original tree is up for speculation.

To make matters even more complicated is that both wolf and dog bones have been found in ancient human camps. This fact makes it even harder to establish when wolves were first domesticated.

One thing that history does show to be fact is that dogs have been a part of human life far longer than other domesticated animals such as cows, horses, pigs, and cats. Dogs have developed extremely sophisticated social skills which have allowed their so thorough integration into human society. No other animal is so well adapted to living with humans. Dogs of course have undergone much artificial selection by humans to become the socialized animals they are. But dogs (wolves) had to posses a basic ability to be socialized which other animals simply did and do not posses.

One reason dog history is so full of unknowns and speculation is that everyone considers themselves to be dog experts! Whether it is an average dog owner or a "canine" paleontologist, everyone has a strong opinion. Most, however, agree that our dogs' ancestors were the wolf. A few though think the original dog line was from some other canid species such as a jackal. Or even perhaps the line came down from some hybrid species or some now extinct species. And some even suggest our dogs were decedents of several domestication's of different species.

However, modern DNA research highly suggests that our dogs are extremely close genetically to modern wolves. This leads very strongly to the theory of wolves being the forefathers to dogs.

The date of dogs' first domestication is in debate as well. About the earliest suggested time for dogs' appearance in human history is about 15,000 years ago. Differences in both DNA and bone structure of wolves of that era suggest the remains found were dog like. One important find was of an Israeli woman buried 12,000 years ago with a puppy in her hands. The question as to wear the first domestic dogs were raised is also up for debate. Several years ago a study was done on this. Hundreds of dogs from around the world had their DNA studied.

Through a complicated study of inclusion and elimination, it was discovered that dogs in Asia had the best chance of being more closely related to the original dog than in any other part of the world. However, this same study suggested the DNA line had been in place for almost 120,000 years. This is almost 10 times the age of the first known fossil record of dogs with humans. One problem could be the fact that early man could not control his dogs with interbreeding with wild wolves. This could lead to some very confusing evidence for our current researchers of dog history.

One thing is certain though. Early dogs were on the trip when the first humans came to the " New World " across the Bering Strait nearly 15,000 years ago. And DNA studies have shown that our modern day dogs are not ancestors to the North America gray wolf. Our dogs have wolf ancestors which inhabited Europe and Asia . The North American wolf is simply a distant cousin.

But DNA can only tell part of the story of dogs' history. Early dogs had the unique ability to modify their behavior to fit in with humans. It was beneficial from a dog's point of view to be able to live with humans. Humans provided shelter and water, and food in many situations. And humans were hunters. Dogs love to hunt! What a perfect fit!

Many people tend to look at primates as the only other animal with higher level thinking skills. But as all of us dog owners know, dogs are pretty smart! Research has shown that puppies have much higher communication skills than wolf puppies. Even puppies which have had little or no contact with humans perform far better in communication tests than their wolf counterparts do! This has further complicated the question as to dogs' origins.

It is thought that about 8000 years ago was the first attempt by humans to actually breed their dogs for specific traits. One of the oldest known breeds was the Saluki breed found in ancient Egypt . These dogs were bred for their hunting skill. Other early breeds the Egyptians were thought to be responsible for were the Lbizan, Basenji, and Afghan. And the Dalmatian was a subject of paintings dating back to over 2000 years! GO STORM!!

Just as today, early dogs were much better off in rich societies than in poor ones. During the Greek and Roman empires the status of dogs went from hunters, herders, and guards to simply pets. Dogs started appearing in sculptures and paintings of everyday life. It was becoming a dog's world! In the ruins of Pompeii was found a dog by the body of a child. The dog wore a silver collar inscribed with a message saying he was owned by the boy.

In the Far East , a dog's status was dependent upon its breed. Dogs in the Far East could be loved pets, trusted hunters and guards or simply something to be eaten. "Noble" dogs such as the Pekingese were considered so important by royal families that they were provided their own human servants! Many other dogs out in the countryside were often just meals for the villagers. In Tibet , the common Terrier was considered to be such good luck it could not be bought or sold for any price. In the middle ages, pure bred dogs became the status symbols of royalty.

Our dogs' genetic and social past has to be one of the most interesting side notes to human history. They have been part of our hunts, guarded our shelters, given us special status, and provided companionship for thousands of years. Their loyal and trusting behavior was a perfect fit with humans over the eons. Who knows how human history would be different had dogs not been a part of it. For thousands of years they have been our companions, helpers, hunters and friends. It seems safe to say that one thing is certain about man's future: dogs will most definitely be in it!

Steve Weber owns http://www.cactuscanyon.com/ which offers advice and natural products to owners of dogs with arthritis.

Article Source: http://EzineArticles.com/?expert=Steven_Weber
Posted by M at 11:44 AM

Hello,
Great article about dogs!I still believe that dogs are the best friends of human being.Dogs perform many roles for people, such as hunting, herding, protection, and, more recently, assisting handicapped individuals. Currently, there are estimated to be 400 million dogs in the world.