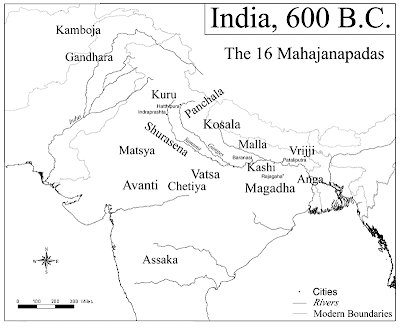 FACTS-ABOUT-INDIA.Com has a nice subsection on the History of India. I am highlighting the Ancient India section here. It has subsections on Sources of Ancient Indian History, Pre Historic Period, Indus Valley Civilisation , and the Vedic Age. Another good look is at History of India.
From the site:
The ancient civilization of India grew up in a sharply demarcated sub-continent bounded on the north by the world's largest mountain range-the chain of the Himalayas, which, with its extensions to east and west, divided India from the rest of Asia and the world.
The long sea coasts of India facilitated the growth of maritime trade and a large number of harbours were established through which trade relations with Rome, China, Malaya, South East Asian archipelago were set up. India's centralised position in Indian Ocean is also of great strategic and economic importance.
Posted by M at 5:46 AM 2 comments: Links to this post

With permission, I am republishing the post A royal feud? written by Jennie Weber. I think it is interesting and worth publishing again.

This is an interesting article on the "feud" that has often been put forth as why many of Hatshepsut's monuments were destroyed. This is a major issue for Ancient Egyptians as they believed that this is how the Pharoah lived on in etnerity and to destroy their statues and writings (so their memory) was to destroy their soul in the afterlife. The bulk of the destruction was done during her stepson, Tuthmosis' reign, and so many assumed that he hated his stepmother for taking some of his power (as she ruled as co-regent). Dr. Joyce Tyldesley has this to say on Tuthmosis:

It is undeniable that someone attacked Hatshepsut's monuments after her death. Archaeology indicates that the bulk of the vandalism occurred during Tuthmosis' reign. Why would he do this? At first it was imagined that this was the new king's immediate revenge against his stepmother; he was indeed cursing her with permanent death. The image of the young Tuthmosis seething with impotent rage as Hatshepsut ruled in his place is one which has attracted amateur psychologists for many years. However, it does not entirely fit with the known facts.

Tuthmosis was to prove himself a calm and prudent general, a brave man not given to hasty or irrational actions. He did not start his solo reign with an assault on Hatshepsut's memory; indeed, he allowed her a traditional funeral, and waited until it was convenient to fit the desecration into his schedule. Some of the destruction was even carried out by his son, after his death, when most of those who remembered Hatshepsut had also died. It is a remote, rather than an immediate, attack.

Furthermore the attack is not a thorough one. Enough remained of Hatshepsut to allow us to recreate her reign in some detail. Her tomb, the most obvious place to start the attack, still housed her name. Hatshepsut may have been erased from Egypt's official record, but she was never hated as Akhenaten 'The Great Criminal' would later be.

So what does she think happened?

What can we conclude from this tangled tale? We should perhaps rethink our assumptions. Hatshepsut did not fear Tuthmosis; instead of killing him, she raised him as her successor. Tuthmosis may not have hated Hatshepsut. Initially he may even have been grateful to her, as she had protected his land while training him for greatness. But, as he grew older and looked back over his life, his perspective would shift. Would Egypt's most successful general, a stickler for tradition, have wished to be associated with a woman co-regent, even a woman as strong as Hatshepsut?

By removing all obvious references to his co-ruler Tuthmosis could incorporate her reign into his own. He would then become Egypt's greatest pharaoh; the only successor to Tuthmosis II. Hatshepsut would become the unfortunate victim, not of a personal attack, but of an impersonal attempt at retrospective political correctness.

Tuthmosis set his masons to re-write history. Their labours would last well into the reign of his successor, Amenhotep II, a king who could not remember Hatshepsut, and who had no reason to respect her memory. Meanwhile, hidden in the Valley of the Kings, Hatshepsut still rested in her coffin. Tuthmosis I had been taken from their joint tomb and re-buried, but she had been left alone. Tuthmosis knew that as long as her body survived, Hatshepsut was ensured eternal life.

I find this story - that Tuthmosis was trying to improve his image - as more pausible. It makes sense with the partial destruction and shows that while he was trying to negate her role, he wasn't trying to kill her memory - merely change it to suit himself.
Posted by M at 5:39 AM No comments: Links to this post

Book Review - Across the Endless River 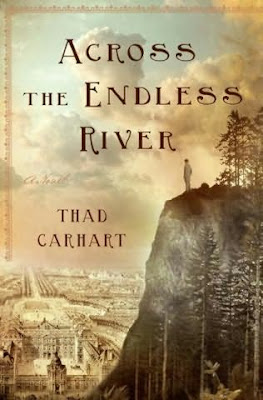 Across the Endless River, by Thad Carhart, is a fictional account of Jean-Baptiste Charbonneau’s visit to Europe. Charbonneau was the son of Sacajawea and French fur trader Toussaint Charbonneau, who accompanied the Corps of Discovery led by Lewis and Clark. Unlike most historical fiction where the main characters are fictional encountering historical individuals, in Carhart’s novel, the two main characters, Baptiste and Duke Paul of Wittenburg, are historical characters while the individuals they meet (for the most part) are fictional, “composites of those who would have been in Paul’s social ambit.” The danger of this is that it is easy to read this as a biography and forget that from the moment they set sail for Europe, little to nothing is known of Baptiste’s experiences. From a historical perspective, however, the facts upon which the story is built are accurate. A short “Author’s Notes” helps clarify where fiction takes over from fact.

The book is well-written; I would even use the word “charming” to describe this book. There is little tension or dramatic climaxes (although the narrative about the young Mandans’ initiation into manhood is dramatic and graphic as is the visceral excitement of a buffalo hunt); rather this is a pleasant account of Baptiste’s experiences and viewing Europe through the eyes of a young man who has lived both the Native American life and been educated in St. Louis. Baptiste himself is a combination of naïve and worldly. He is young, eighteen, when he embarks on his European experience with Duke Paul. He has led visitors as they explored the American West and interacted with various Indian tribes, but in Europe he is totally at a loss to understand that world. Over the five years he lives in Europe, assisting Paul with his book about American natural history, he learns about life and love.

The book provides an interesting look at life in Europe during the 1820s. Four years after Napoleon’s death in exile, he is still of paramount interest to the people not only in France, but throughout Europe. We get insights into the interest in natural history, music, and politics through Baptiste’s experiences. The life lived in harmony with nature in America is compared and contrasted with the refined life in Europe.

This book should be of interest to individuals interested in early nineteenth century American and Europe, Native American life, international politics, natural science and more. For example, anyone concerned with the repatriation of Native American goods (i.e., NAGPRA) may be interested in this account of how so many Native American artifacts spread throughout the globe and the attitudes of those collecting them. Baptiste’s growing discomfort with the scientific, almost clinical, handling of these artifacts is a theme throughout the latter part of the book.
Posted by M at 7:56 AM 3 comments: Links to this post