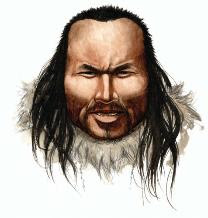 There is an interesting find at of Greenland. The DNA of a 4,000 year old man was sequenced and some surprises were discovered. An article titled After 4,000 years, DNA suggests ancient Greenland man had risk of baldness and even dry earwax was written by Malcom Ritter.

The biggest shock is that the man was not related to any of the Native Americans in Greenland or the Americas. The article notes, "More importantly, comparisons of his DNA with that of present-day Arctic peoples shed light on the mysterious origins of the man's cultural group, the Saqqaq, the earliest known culture to settle in Greenland. Results suggest his ancestors migrated from Siberia some 5,500 years ago."

The analysis shows the now extinct Saqqaq were not direct ancestors of today's Inuits or Native Americans. The Saqqaq are all gone and no one is certain how they arrived in Greenland. Others findings were that the man had the genes for baldness and dry earwax.

The article also noted, "The DNA was recovered from a tuft of hair that had been excavated in 1986 from permafrost on Greenland's west coast, north of the Arctic Circle. The thousands of years in a deep freeze was key to preserving the genetic material. But most ancient human remains come from warmer places with less potential for preservation, and scientists said it's not clear how often DNA from such samples would allow for constructing a genome."