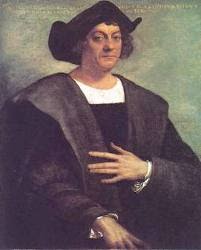 Christopher Columbus gets blamed for lots of things from being a poor manager to being one of the causes of the mass genocide in the new world. However, one thing he is not associated with is global climate change. Until now anyway...
An article by Devin Powell titled Columbus blamed for Little Ice Age has some details. It notes, "By sailing to the New World, Christopher Columbus and the other explorers who followed may have set off a chain of events that cooled Europe’s climate for centuries. The European conquest of the Americas decimated the people living there, leaving large areas of cleared land untended. Trees that filled in this territory pulled billions of tons of carbon dioxide from the atmosphere, diminishing the heat-trapping capacity of the atmosphere and cooling climate, says Richard Nevle, a geochemist at Stanford University."
Dr. Nevle is quoted, "“We have a massive reforestation event that’s sequestering carbon … coincident with the European arrival.”

I am not going to doubt the sincerity of this research. The world was changed by the European discovery of the new world. Lots of things happened. But Columbus sailing his boats across the Atlantic caused the Little Ice Age in Europe? I think it goes to show how we just don't understand everything about the global weather and how it acts over the long term yet.
Posted by M at 3:53 PM 7 comments: Links to this post